A brief history of Enniskerry Enniskerry Village (Ath na Sceire ‘Ford of the Stones’) was built as part of Powerscourt Estate to house its tenants who worked the land in the area. The village was designed and laid out by the architect Frederick Darragh. Subsequently, the village changed rapidly after the arrival of the railway to Bray in 1854.

The magnificent Palladian mansion Powerscourt House was commissioned by Richard Wingfield, 1st Viscount Powerscourt (1697-1751). Designed by Richard Cassels, it was destroyed by fire in 1974, and remained as a shell until extensive restorations were carried out in 1996.

The Town Clock was built, at the expense of the 6th Viscount Powerscourt, to commemorate the centenary of the creation of first Viscount in 1743. The monument was presented to the Village on St. Patrick’s Day 1843. An interesting feature of the monument is that its base is shamrock shaped. There was a massive tree at the bottom of the Town Clock steps until the 1920s as can be seen in old photos of the square.

The village school house opposite the Town Clock was built in 1818 and was being used as the local Church of Ireland National School until 2013. The nearby house, ‘Ferndale’, built c.1850, served as the School Masters house. Until the 1970s there were two big Cedar trees in front of the school.

The Protestant population of the village attended church in the grounds of the Powerscourt Demesne until 1859. Mervyn Wingfield, 7th Viscount Powerscourt, built a new church, Saint Patrick’s, overlooking the village which was completed two years later in 1861 at a cost of £3441 9s 2d. St Mary’s Catholic Church was built in 1859 by Fr. Thomas O’Dwyer on a site provided by the Powerscourt Estate. Prior to this date there was no Catholic Church in Enniskerry and Mass was celebrated in a barn that was made available by a Mrs. Dixon. Once the Church was completed the parish of “The Immaculate Heart of Mary” was constituted and Fr. O’Dwyer became its first parish priest. Up to that time he was the local curate within the parish of Bray.

The Powerscourt Arms Hotel was first built in 1715 and further construction work was done in 1835. It was burnt down in 1894 but it was rebuilt soon afterwards. The Parochial Hall was constructed c.1850. The Forge/Smithy on Forge Road was built in 1855 and horses were shod here until the late 1970s.

Knocksink Bridge was built in 1859 and was, at one time, the highest bridge in Ireland. During the Second World War holes were drilled in the bridge in order to blast it with dynamite in case of invasion.

The Bray and Enniskerry Railway was proposed in the 19th century, to link the town to Bray. Some initial work was carried out, including building a bridge to carry the railway over Dublin Corporation’s Vartry watermain. Wicklow County Council recently removed much of the railway embankment in road widening, but left the bridge, which is directly opposite the ornate bridge carrying the watermain over the Cookstown River, a tributary of the River Dargle. The plan ran into financial difficulties, and the rails were lifted and sold off.

There was a plan to bring a railway line to Enniskerry in the 1840s but this came to nought due to lack of funds. The embankment and other elements of the works were still visible until recent times. The bridge along the R117 from Bray was built then to protect the water main which comes from Roundwood and brings water to south Dublin. 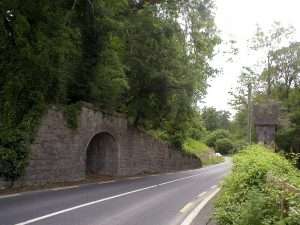 While Enniskerry has changed over the years it still retains its Victorian character which gives the village its unique charm.